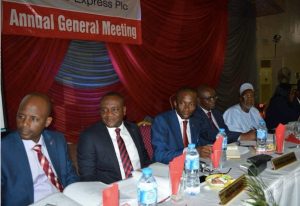 The Board and Management of Red Star Express Plc have vowed to make the reduction of the age of debts, owed to the company, a major priority for the new financial year. Both have stated that they are prepared to work hand-in-hand to ensure that the company’s debtors are able to pay their debts on time, regardless of the economic conditions affecting them.

This was stated during the last Annual General Meeting, held on Thursday 31st August, 2017, at the Welcome Center, International Airport Road, Lagos. The issue of reducing the time it takes debts, owed to the company, to be paid was raised by some of the shareholders in attendance on that day. They expressed concern over the results, which showed that the debt carried over into the new financial year is more than that of the previous financial year.

Speaking at the event, former Managing Director and Vice-Chairman of the Board, Mr Isaac Orolugbagbe, addressed this issue while addressing the concerned shareholders present. He suggested that with the increase in revenue and profit, it was only natural that the debt carried over should increase. “When there’s an increase in revenue, it is possible that debts would also increase” he said. However, he mentioned that the management has been tasked with reducing debt incurred over the financial year. According to him, it is one of their receivables for the year as they bid to have a better financial year than the recently-concluded one. He said “The Board is always challenging the management on its receivables, and this is one of them”.

Mr Orolugbagbe stated that new policies and structures have been put in place for the debts to be reduced significantly in this new financial year. One of these new policies is the new Credit Collection Policy which gave new timelines for how debts owed to the company will be handled. The new policy states that Commercial Executives are to handle debts that last between 90 and 120 days while Credit Collectors are to handle debts lasting over 120 days. According to Mr Orolugbagbe, this will help the company to reduce the time it takes clients to pay their debts to the company.